Home » Business » Did anyone mention you on LinkedIn?
Follow Us:

Did anyone mention you on LinkedIn?

LinkedIn is continuing on rolling out a range of new features starting with mentions. Think of them like idly dropping someone or some organization into your interactions, a little like adding in a Twitter handle on Twitter.

This new feature hails towards making LinkedIn more interactive and engaging with your connections and the others that you interact with on your home page. This is a new feature but builds on the existing status message functionality (see this old blog post) enabling you to flag someone’s name or organisation within the status message, comments or interaction on status messages that you share with your own network. A great way to build those relationships!

As soon as you start typing an individual or organisations name in your status it will pop up a pick list for you to choose from, see below 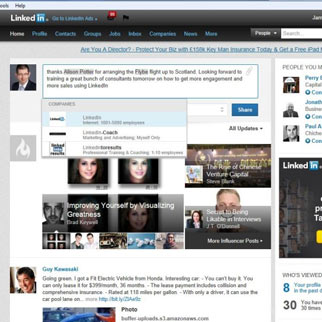 As soon as you mention someone in your status or that of others they will receive a notification (just like you get for interactions, messages and invites) so they are aware of it instantly, thus enabling them to continue the “conversation” within LinkedIn or outside of it over a telephone or coffee (my preference!).

2. As soon as you start typing a name the drop-down box will appear with a list of connections / companies. Simply select the connection or company you wish to include in your comment or status update and that’s it!

3. After finishing your comment or status update, the mentioned company or person will receive a notification alerting them that they have been mentioned on LinkedIn. It’s as easy as that!

4. Note: You can even mention 2nd connections that already engaged in the comments section of posts on your LinkedIn homepage. This makes it nice and easy to start conversations with people who you aren’t connected to using this functionality.

Despite the divorce of LinkedIn by Twitter back in July 2012 mentions will “translate” your mentions of individuals names on using the feature will automatically translate to their Twitter names within Twitter, very neat!

LinkedIn said in its release announcement of the mentions feature that there is more to come, rumours are rife and include a range of new potential functionality – be interesting to see what they release next.

My bet is on a positioning / GIS tie in, as it is weak in this area, what would you like to see in LinkedIn as the new feature?

4 thoughts on “Did anyone mention you on LinkedIn?”